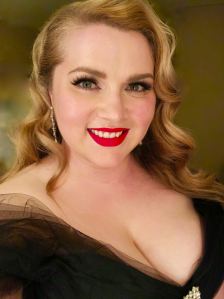 For Opera Australia, Anna-Louise made her title role debut as Aïda for Griffith Opera on the Beach in 2017. She has also performed the roles of Crobyle in Thaïs, Gerhilde in Die Walküre and the Dritte Norn in Götterdämmerung in the 2016 Melbourne Ring, and was nominated for a 2017 Green Room Award for best Female in a Supporting Role for these performances.

In 2020 Anna-Louise will make her role debut as Sieglinde in Opera Australia’s new Ring Cycle, and will understudy the role of Brünnhilde in all operas.

For Opera Australia, Anna-Louise has understudied the title roles in Turandot, Salome and Aïda, Sieglinde in Die Walküre and the roles of Praskovia Osipovna / Bubliki / Presenter in Shostakovich’s The Nose.

As the winner of Opera Foundation for young Australians Vienna State Opera Award, Anna-Louise worked in the principal ensemble of the Wiener Staatsoper from January–June 2017, where she performed the role of Melanie in the new Kinderoper Patchwork, and understudied numerous roles including the title role in Tosca, Donna Anna (Don Giovanni) and Amelia (Un Ballo in Maschera).

With other companies, Anna-Louise has performed roles including the title role in Tosca, Erste Dame (Die Zauberflöte) and der Friedensbote (Rienzi) with companies including the Victorian Opera and Melbourne Opera.

Born in Melbourne, Australia, Anna-Louise holds a BA Hons in German and a BMus Hons in Music Performance (Voice) from the University of Melbourne. During her degrees, Anna-Louise also studied at the Kunst Universität Graz, Austria and Karl-Ludwigs Universität, in Freiburg, Germany, through scholarships from Melbourne Abroad and the Deutsche Akademische Austauschdienst.

Anna-Louise has been a winner and finalist in many singing competitions, including the AIMS and Sundell Study Awards, the Elizabeth Connell International Singing Competition for Dramatic Sopranos, the Herald Sun Aria, the German Opera Scholarship and the Lady Fairfax New York Scholarship from the Opera Foundation for Young Australians.

Anna-Louise has appeared in numerous opportunities on the concert platform and in recital in Melbourne, Sydney and Vienna. Highlights have included performances of the soprano solos in Rossini’s Stabat Mater and Mozart’s Mass in B Minor and recitals of operatic arias and Lieder, including Wagner’s Wesendonck Lieder and Berg’s 7 frühe Lieder.

Anna-Louise’s position at Opera Australia is supported by Rosemary Block.